For their field research, Jake and Kevin interviewed mall goers, asking them to recall the last time they used a pay phone, and when/if they ever actually made a call inside a phone booth. It becomes an audio series at GmorningPoetry about remembering, that parlays into a disappearing act of their cell prop as evidenced in the google "before" shot and then the artists' photo of a phone booth come spot/trace/memory for their truck stop performance and text. What follows is a response from kevin mcpherson eckhoff and Jake Kennedy from sunny Vernon, British Columbia. 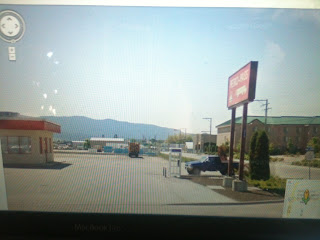 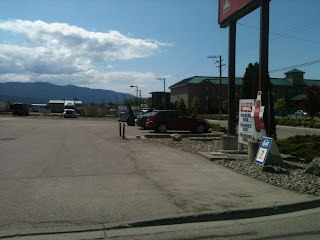 Please welcome[1] to cell[2]! We, our phonebooth, performed an autophagocytosis and Bill&Ted’d into the past… Most excellent[3]! Almost extracellular!

Morals reformed — health preserved — industry invigorated — instruction diffused — public burdens lightened — economy seated, as it were, upon a rock — the gordian knot of the poor-law not cut, but untied — all by a simple idea in Architecture!
Jeremy Bentham, 1787

Have you ever used a remember[4] when they existed and where? Sequestered lysosomal machinery acts intracellular as a tightened degradation of damaged flagella with sonically enhanced vesicles! So many people[5], so few blebs! Human friends and strangers begin mitosis and meiosis through virtual mouth-ear telomere shortening!

To save the troublesome exertion of voice that might otherwise be necessary, and to prevent one prisoner from knowing that the inspector was occupied by another prisoner at a distance, a small tin tube might reach from each cell to the inspector's lodge, passing across the area, and so in at the side of the correspondent window of the lodge. By means of this implement, the slightest whisper of the one might be heard by the other, especially if he had proper notice to apply his ear to the tube.
Jeremy Bentham, 1787

The new allostery depends upon the apoptosis occurring along geographic here and there, everywhere[6]. Hear how prokaryotic equals catabolic communciation of “pardon me?” and “how are you?” Voices grow culture, enzymatic osmosis forever[7]! Between/among real humans! Outracellular! Party line on!

[1] Already the booth was in the past tense! As we approached our site we noticed that obsolescence leaves its traces… which made us feel especially surprised and just as susceptible! Cement Welcome mat leading… nowhere!
[2] Oh so the absence at the heart of “such as a honeycomb” or “such as a prisoner’s cell” moved outwards until, as if, “nothing” was the booth.
[3] Part of our exclamation was tied to footnote 1, i.e. “Are we still here?” No answer. “Let’s yell and find out!”
[4] When we asked folks when was the last time they used a public remember it was and sounded like (very much so) quite a different age—as if they were trying to remember when they first learned to speak.
[5] People, before, were “out into the openings” of the world. Without this booth it seemed to us that—to some extent—folks had moved conversely back “in into the closing off” of the cellular moment. We felt a bit nostalgic for the sight of a site made exclusively for “one room for one person to pick up one heavyish phone.”
[6] The whole notion of everywhere was in suspension. The removal of the technology meant the supremacy of another—the condition of the “everywhere” seemed so much greater than the human. For instance, this booth used to be called “Post-Midnight Rain Refuge Resting Area.”
[7] For us, the cement slab was unavoidably a memorial. Anyway, there was very little left to occupy.
Posted by paola poletto at 10:39 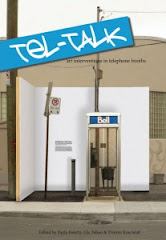 See photos from the event

Want to Tel-Talk with us?

Give us a ring! ringring.teltalk@gmail.com